Some readings that came along

In “Phantom Sensation” project we work at the intersection of dance and neuroscience, dwell and examine in practical and theoretical terms the phenomenon of phantom sensations. What we try to understand is if and how the phantomic experience of reality can inform the movement improvisational practices, and whether it can create a distinctive frame for thinking about some aspects of performance. It is a transdiciplinary venture.

To the workshop we invite everyone who would like to experience and play with what we call “phantomic sensation”. Through exercises involving touch, words, work with partner and eyes closed we will investigate different  modes of sensorial, attentional  and physical engagement in body awareness processes. From this point we will explore our moving-selfs.

In the open moment  we will share and discuss our research - concept of phantomic sensation and address the specificity of work emerging from the dialog between experience and neuroscientific knowledge.

Posted by Phantomculi at 12:56 AM No comments:

If I were a mountain 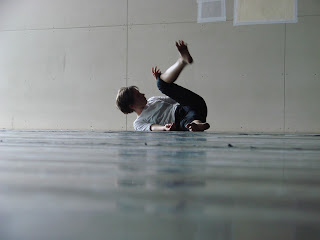 Floating thoughts, and many questions.

What body appears, what body interests us ?

There is a desire to enter a state of potentiality. A state or even a temporary cosmos where the differentiation between moving body and self melts. State in which a new organization may offer not yet quite familiar functionality. As if dance would derive from testing and learning new ways of functioning.
Body that may transgress a common, daily formation.
Body that dwells a certain “thing”, something that describes a body. So the body may become “something”, where the “something” might be an action as well, or a memory or a creature. And that something is being processed while moving.

Body that listen also through touch.
What happens when the stimulation comes ? How do I allow a stimulation to be translated? So we often touch each other. The touch we work with is also that which I have learned from Rosalind Crisp. For the stimulation we are borrowing, and using her tools. There is a vast of information that might be transferred through touch. Stimulating touch – one that contains variety of qualities and potentiality of movement may trigger an imaginary world for the receiver. Allowing appears to be an issue. It is up to the receiver what she ( as we are three females working in the project) will do with the stimulation, how she takes it into movement, or will be taken by it.

Sometimes we work with as least informative touch as possible, kind of a pancake or a tart. It is not very exciting, but we value, it gives warmth, and with time the information melts to the body, does not give much stimuli, but it is up to the receiver what she might do with that place under the pancake.

Within the phantomic sensation research we are also searching and finding something underneath, that may underlay performative presence, and movement – something else to the will, something that leaves a trace, and triggers difference in a body schema, evoking mental images as well...
And that difference in the body schema may become visible for a viewer, when the body image changes.

Body that is reformulating itself while moving. Body that can surrender to the image from within – a proprioceptive image, by inhabiting for instance different qualities of touch that it receives. Body that discovers its functionality a new.

Where are the borders of the body, and how they change in this practice ? Reference to phantoms certainly point that aspect. How do we feel, and experience as real that what emancipates itself in loss?

There is also a certain pleasure in a state where the body comes in a contact with an environment (understanding that term after Lisa Nelson). When coming in contact with an environment a relation happens. Relation within – with self, with a trace of the stimuli, with an image that may arise, with the desire which might be fulfilled in movement, with the space we share, with time. (We did not work with focus on relation to space and time directly, as for some of us it was already supportive issue) We worked mostly with translating various touch-stimuli, observing images that may arise, letting them go either in movement or in saying stories – that might be touch-stimuli-image reports, or memories, or streams of associations, or others.

Coming in the contact with environment gives a possibility to experience something pleasent, something profound–  forgetting oneself, a potential of union...
Posted by Phantomculi at 2:34 PM No comments:

The selfs we work with

Engaging into the topic of phantom sensations which is in neuroscience often debated in terms of neural body representations (body image, body schema), the question we needed to consider right at the beginning was „what body we work with?”- how the body is defined as a material to shape with experiences.

We chose our working body to be available and accessible for stimuli and any kind of responses, alert to its constant transformation, reorganisation, a fluently changing sensual form, which is uncertain or even does not know its own shape or constitution. Informed by reports of sensations in phantom limbs, in which the body schema built from sensory and proprioceptive information creates another body structure than the representational body image, the body we work with could only be the one adaptive to sensory input, which re-constitues itself due to sensory re-mapping.

Along the researching process, we found suspected support in somatic approaches, neuroscience and experiential reports. For instance, in Body-Mind Centering
"the 'mind' of each cell, body tissue, and fluid, expressed in feeling states, posture, and movement patterns, is by nature open to the constant flow of momentary change”.*
Interestingly, it is the 'mind' of cells which has the property to allow constant transformation. Here the concept of the body meets one of the fresh definitions of the mind in neuroscience, the view of mind as a „process that regulates the flow of energy and information”**.
This definition entails that mind is subject to ceaseless recreating its content, continuously formulating its matter. Moreover, it has a sense of intentionality – being a process heading somewhere, even if the goal realises rather in sequences (streams) of temporary states, than any arrival point.
As dance artist Gill Clarke states, „mind in a sense IS motion”***.

The integrity of the body and mind concepts invites to employ rather one consistent entity than analyze two separate processes. Following Gill Clarke, this entity may be the self which encompass integrated body and mind, defined with the described qualities. In this case not the body and the mind, but the self is undergoing or designing its own constant transformation of the matter.
While the term "self" allows us avoid the dualism, it brings up another broad territory of psychological and philosophical discourse. However, it may function well when working with multimodal events, where sensations, stimulations, images, cultural associations, memories, bodily states, movement, gesture are all mixed together and inseparably bound with each other.


* Hartley, L. (1995). "Wisdom of the body moving". North Atlantic Books
** Siegel, D. "Mindful brain. Reflection and attunement in the cultivation of well-being"
*** Clarke, G. "Mind is as in motion". www.independentdance.co.uk/wp-content/uploads/2010/11/MindIsAsInMotion.pdf

Phantoms of the Paradise

After first week of exploration and revisiting exercises from our last meeting, we arrived at the point where many of the roads we took before came together to create a potential playground for the phantomic sensation to become present through movement, words and touch.

Curious to experience the tangential point of phenomenological and physical body* we were experimenting with the space between attention directed to various places on the body and actual tactile stimulation. Through this practice we observed the life cycle of  sensation transformed to movement. 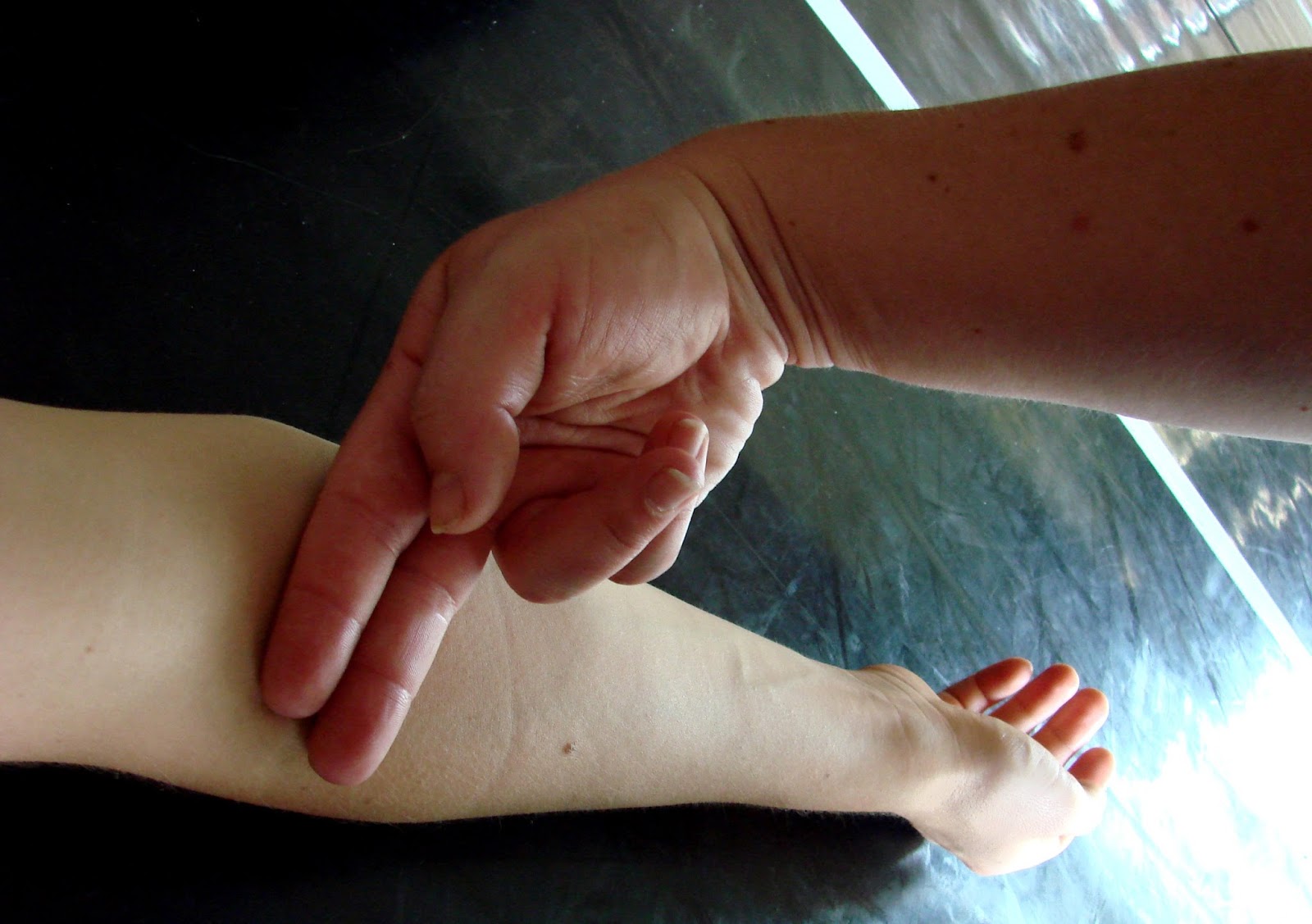 To keep the clarity of the work, we dealt in the beginning with the touch which remained simple and quite constant with its quality. That satisfied our curiosity for sensing and feeling, but awaked a desire for more stimulation – a touch that would deliver reacher motivation and prompts for action. As we noticed, a variety of touch qualities (as knocking, pressure, sliding on the surface, etc...) evokes not only somatic sensations but inevitably the non verbal, yet non conceptual somatic imagery. That realm of imagery opened up our field of inquiry.

What happens if we do not only constrain the response to embodying images in movement but allow any arising associations deriving from touch, to enter our consciousness and to be verbalized and spoken out loud? Taking this question into practice, we discovered that verbalized and embodied sensations and images can create multimodal realities including touch, movement and words. Though rather then collection of elements the multimodal realities become eclectic set with the inner logic of relations involving narrative events.

This practice enables us to access particular state which might unfolds many different phenomenological existences, disguised by a physical body.
Following this direction we can play with a physical body as an interface which runs and displays different programs of phantomic being.

* inspired by Hilti and Brugger (2009) definition of phantom sensation as "dissociations between physical and   phenomenal body shapes".
Posted by Phantomculi at 12:36 PM No comments:


I think of phantomic experience as the delicate aspect of memory, that is connected  with traces or echo of sensations and movement, and how they coexist with the present moment.

Sensations of touch and weight.
The touch of the other but also the touch of attention.
Weight as it shifts and swings within own body, or is normally distributed through some constellations of it,  but also weight that one gives towards certain things (value).

Movement as a term mostly understood as a physical action experienced by the performer (and/or reflected by the spectator via mirror neurons), but also movement of the thinking process and the question which is not pursued by the answer (even though question awaits the answer, the answer does not appease the question, it can only stop the movement of  it), is a self stirred movement of going to the bottom, uprooting, coming to the surface, opening, hiding again, turning, steeling away[1]

I call it phantomic experiences because though in many ways the nature of these traces is ungraspable, the studies in phantom sensations show how very much the subjective experience of a phantom sensation can be objectified or shared with the other via the image of brain activity. Though in medicine phantom studies are mostly occupied with developing ways of treatment, thanks to which patient who undergo amputation or stroke would develop the “better match” between the feeling and the body, some scientist propose that the demystification of the current-day concepts of “the self” will be amongst the foremost future prospects of phantomology.” (Balnke, Matzinger 2009, Brugger 2012)

[1] Maurice Blanchot, Most Profound Question pp 11-25, In The Infinite Conversation

Posted by Phantomculi at 12:41 AM No comments: